The Spirit Of Sanballat, Globalism and Trump 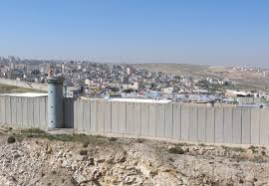 From the above photo it is evident that a wall exists to either attempt to solve a problem or at least diminish it, or just to prevent future problems. Whatever the case land boundaries exist and must be respected. In the above case that is the wall in Israel separating Israel from the “West Bank” known in some circles as Palestine. That wall was built to prevent terroristic attacks on the citizens of Israel, especially in and around Jerusalem. In other words it exists to protect the citizens of Jerusalem and all Israel from violence and illegal entry.

The question of ‘protecting our borders’ in the United States, and further even the question of globalization and nations without borders is currently a hot topic in all circles of conversation. Nations without borders or boundaries is unimaginable, and still further there is a Biblical reason as to why they exist. In Deuteronomy 32:8 we read, “ When the Most High gave inheritance to the nations, in separating the sons of Man, He established boundaries for the peoples according to the number of the sons of Israel.” National boundaries have existed since there have been nations, and still there have also been wars over those boundaries.

It is not perfect because man is in control, people often want what is on the other side. In the case of Nehemiah he was distressed because the city of Jerusalem lay in ruins and the Temple as well. When Nehemiah was finally given the authority to go to Jerusalem and rebuild the wall he was opposed by leaders like Sanballat and Tobiah. The reason the wall needed rebuilding was that the invaders from Babylon had overtaken the city and broken the walls down. But why was there a wall there in the first place?

We have to go way back to before king David when the city we call Jerusalem was known as Jebus, and was the Jebusite stronghold. We see in 1 Chronicles 11:4-9 and 2 Samuel 5:6-10 the story of how David was taunted by the Jebusites and told him “you will not come in here.” But David was able to capture the city by sending men through the underground cistern, the same wells that became Hezekiah’s tunnels several hundred years later. You see the children of Jebus built a wall to protect themselves to avoid “unlawful entry”and provide a safe haven for its citizens.

Walls have been built for centuries for the same reason. While the wall that Nehemiah rebuilt may have been covered by earth over time there still exists walls from ancient times of what we now call ‘the Old City of Jerusalem.” While there are some walls that need to come down especially invisible walls where people need to receive the gospel we need to see some walls as necessary.

Our country has been faced with a massive crisis on our southern borders. While the United States was founded by immigrants and has always accepted and receive immigrants for various reasons, at the same time there has always, with few exceptions, been a set criteria for entering the United States legally. In our modern world there are many voices crying for ‘open borders.’ While some are noble, i.e. tourism, education, trade, there are still others that are rotten and just purely evil.

The same spirit that opposed Nehemiah in rebuilding the wall in ca, 526 BCE exist to try to tant our President and prevent him doing what he and others feel is the right thing to do to prevent future terrorism and get a handle on the drug problem coming up from Central America. If any citizen of The United States were to do what is being done now by the so called ‘caravan’ to Mexico or any other Central American country we would be met not only with opposition but without a valid reason for being there most likely turned away. Again it is called respecting each others boundaries.

We see also in Acts 17:26 where Paul gives a rendition of the Deuteronomy 32:8 verse when he says, “ He made from one man, every nation of mankind to live on the face of all the earth, having determined their appointed times, and the boundaries of their habitation.” Again God has determined the appointed times for nations and their boundaries. We see open borders throughout Europe, and we see many problems arising. The move for globalization is on and will continue until Messiah Jesus comes and establishes His Millennial Kingdom.

Until Jesus does return we have a choice, to either love and respect the nation we are in and its boundaries, and further those of our neighbors, or give in to the rise of “One World Government”, which is the agenda of the future Antichrist. The issue is not a matter of ‘feeding and clothing’ the foreigner. If people desire to come to the United States or any any country other than their country of Nativity then let them apply and go through proper channels. Whenever I travel to another country I always have to go through their process in order to be accepted for whatever time period I am planning to be their.

Building a wall, fence or any boundary protecting system is costly in time, money and resources. Yet, the cost of not building may ultimately be the highest cost of all. We never know what intent one ultimately has or their full motive, and we may never keep 100% of all troublemakers out, but we can certainly bring tit to near zero. Since Israel built the border fence shown above it has cut illegal immigration by 99%.

There is no perfect solution and as mentioned until Jesus returns we are left to work out our border issues as best as we can. Perfect peace can only be found in Jesus Christ. Nations have many reasons for wanting to expand borders. We must learn to share resources and try as best as we can to get along until Jesus separates the ‘sheep’ nations from the ‘goat’ nations.

I say without further delay as written in Nehemiah 2:18, “Let Us Arise and Build.” Pray for our leaders as this critical issue comes to a head in the next few days. Pray for Godly wisdom and Godly Justice to prevail.