Hanukkah! The Church and The New America 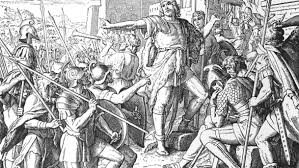 Most people, Jews and Christians aren’t aware of any correlations with Biblical prophecy and the current situation in America, and in the whole world. Yet, Daniel not only predicted the events surrounding the time of the Maccabean revolt, Jesus warned us that there was a connection with the last days and the time of Antichrist/One World government. I know Hanukkah is a joyous and festive occasion and that is the take away for us as believers and disciples of Jesus.

We generally think of Hanukkah as 8 days of lighting the menorah and dreidel and blessings and latkes, matzos,etc. Yes, absolutely it is a joyous celebratory time. In fact it is that joy that we need to remember in the days ahead, especially looking at the political turmoil now. But, what happened that brought the situation in Israel to the pivotal point of the Maccabean revolt and the dedication of the Temple? Why is Hanukkah important? What does Hanukkah have to do with the church in America, and society in America and the world for that matter?

I mentioned in my last blog the events that led up to the Maccabean Revolt, and the ensuing miracle of the Menorah and the feast of dedication. I purposely left out many details on how bad the situation was. The rise of the Seleucid ruler Antiochus Epiphanes was truly predicted in Daniel 11:21-35. If you are familiar with the story the Greeks came after the Persians, as Daniel prophesied, and the rulers of Alexander’s empire were not descendants but rather the product of dividing his empire into four parts. The part that ruled Israel was originally ruled by Alexander’s general named Seleucus Nicanor.

In the second century BCE, before the Roman invasion of Israel, a Seleucid rule arose by the name of Antiochus Epiphanes. This Antiochus was such a terrible ruler that a remnant of the Jewish population ultimately revolted. He brought so many changes in customs, and ultimately set up Zeus worship. He forbade circumcision, and many jews accepted these changes with little or no questioning. Over a period of a few years things reached a fatal climax when Antiochus, who had forbade temple worship by Jews as prescribed in the law, sacrificed a pig in the temple.

Most Christians have probably at some point heard some if not all of this, yet have failed to understand that as this was prophecy there most likely is more to come, or rather a multiple fulfillment. Jesus even warned His disciples about the abomination that makes desolate in Matthew 24:15-16. “When you see the abomination that makes desolate, spoken of by Daniel the prophet, standing in the Holy Place (let the reader understand), then those who are in Judea must flee to the mountains.” Since Jesus is talking about this event, then what He is saying is that maybe you thought that was fulfilled back 170 ord so years ago, but it wasn’t fully fulfilled. In other words there is an abomination, and a worse ruler coming that that one that occurred under Antiochus.

Obviously we are now talking about the AntiChrist. There is also a spirit of AntiChrist that was operating in a major way through the ruler known as Antiochus Epiphanes. The AntiChrist spirit has always been around but it was really prominent in those years. This spirit didn’t have to wait for Christ Jesus to appear in order to operate. As a precursor to end time events, and before Christ actually appearing and establishing His Church, the Jewish people had been entrusted with bring ‘the gospel’ of God’s’ laws and commands to the nations. In the very least the Jews were supposed to be a holy, separate, people.

Certainly the Jews were not supposed to bow down to any other God, but Yahweh or Hashem, the God of Israel. THings had gotten really bad by 166-167 BCE when Judas Maccabees and his followers drew a ‘line in the sand and said no more.’

They had had enough and rose hope to literally fight against the strong powers telling them you can’t worship your God and you can’t obey the Torah or read the Prophets. You have to accept all of these secular changes. Does any of this sound familiar? It should sound familiar to a Christian in America and to a lesser degree to the rest of the nations.

Globalism, the New World Order, one world government, are certainly terms that have taken over much of the conversation of the day. Along with that is the ideas of one religion or no religion, or even all religions lead the same way. Then there is homosexuality, the transgender populairy, and legalization of marijuana in American states when there is a Federal law banning it. Basically, it’s calling evil good and good evil. Worse the churches have coward down and through time just accepted it. It wasn’t all at once, but little by little.

The American church and many other nations, has kept quit while laws are passed and now the church is expected to be quiet and just go away. While there are remnants of people praying and crying out for repentance, many, even in the church see that as old-fashioned, and believe we should just accept everybody, with no prospect of repentance. The belief is why should they repent, God made them that way or it’s not their fault. We are not really preaching the gospel. God does love each and every one of us and yes He hates the sins. Worse is tolerating a social agenda that runs counter to the written word of God.

So what is to be done. Peter said judgment begins in the house of God. So we must examine ourselves, get in the Word, seek God, pray, fast and be ready to be like the Maccabees. We are in the days where lawless is abounding, but we don’t have to sit idly by and do or say nothing. We need to be like the Maccabees and say “No More.” Actually it is required of us to speak out and declare God’s word, because if we don’t we or not giving a nation a chance to repent. Yes, do it in love, but with power led by the Holy Spirit!

Where are the Maccabees who will say no more? I am not talking about physical violence but that day may come when we are threatened to forsake Jesus, or our lives are threatened for following Jesus. First, we need to stand in the gap and pray for our leaders, and church leaders. Then ask God what He would have us do, and then obey quickly. Maccabees means ‘hammer’, so I pray God’s word would come forth like a hammer.

It’s time to rededicate the Church like the Temple was dedicated in Hanukkah!

One thought on “Hanukkah! The Church and The New America”